In the past, I've used File Watchers in JetBrains Rider to automatically generate SpecFlow feature files, now I want to automate the minification of javascript and CSS files.

Lets start with the easiest part: minifying javascript files. I'm using the npm package uglify-js for this. A quick npm install uglify-js adds the package to my website project and I'm ready to create a file watcher.

Rider has a "default setup" to use uglify-js as a file watcher, but it won't work with the version I installed while writing this blog post.

The default (first picture) uses uglifyjs as the program, but that doesn't work as uglify isn't a script or program. I have to specify node as the program and refer to the uglifyjs package as an argument. The Scope is also incorrect, there is no notion of Project Files. I chose Open Files as the file I'm editing always has to be open.

Personally, I prefer a descriptive name over the package name, so I set the name of the watcher to something more descriptive: Minify JS. That is just a personal preference.

With these settings, every time I save a javascript file, it gets minified, placed beside the normal file and has the extension .min.js.

I have an update, I don't recommend css-minify anymore because it depends on about 50 packages. I recommend uglifycss.

Skip to the update at the bottom of the page to see the updated section that describes how to use uglifycss.

Minifying CSS files was a bit trickier to discover. My current setup uses the css-minify npm package. After I install the package (npm install css-minify), I set up a new file watcher as there is no predefined template. 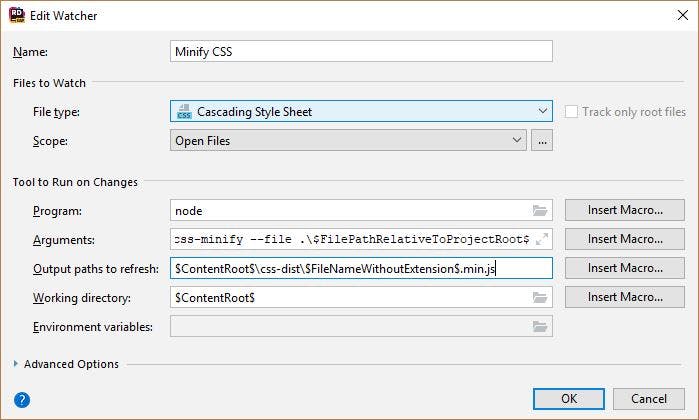 So, again, I start with a descriptive name. This makes recognising what the watcher does easier. The File type I'm using is Cascading Style Sheet and I set the Scope again to Open Files.

The Program is again node and I have to refer to the css-minify package with the correct arguments so the minification happens correctly. This is where it gets a little strange as the css-minify package only outputs to the directory css-dist. If I would put the file directory as the Working directory, like the default setting for minifing javascript, then I would need a folder structure css\css-dist. I prefer two folders next to eachother. In an ideal world, I'd put the minified file next to the original (like the javascript example) because then Rider nicely nests the files. Unfortunately, I can't have it all, so this is the best solution for now.

The bigger problem that I have with the css-minify is that it depends on a ton of packages. I went from 2 or 3 node packages to 51. For a simple css minificaton framework, that seems to be a lot.

An alternative would be the uglifycss package which only needs one npm package install. The reason I don't use uglifycss is that it doesn't output to a file, but just returns the minified css to the console. According to the uglyfycss documentation, all I would need to do is to write the output to a file: node uglifycss style.css &gt; style.min.css. And therein lies the problem, I can't let a file watcher pipe the output to a file. If I add &gt; style.min.css to the Arguments then I get an error from uglifycss saying it doesn't recognise the ">" parameter. I have opened a feature request in the uglifycss project to add an option to write to a file. Add your voice to the request if you'd like a cleaner way to minify css. Outdated, check the update.

Hopefully this benefits not just me, but also somebody else who wants to use file watchers to minify their javascript or CSS.

UPDATE: Apparently, wearing glasses isn't helping and I'm blind as a bat. Frank Marcia, the maintainer of the uglifycss package, got back to my request and pointed out that his package can write to a file using the --output parameter. Since uglifycss uses only one dependency and I can place the minified file next to the original, I'm a big fan of this package. So here are the new parameters to use uglifycss as CSS minifier. The reasoning is similar to the css-minify package, so I'm not going to rehash that.