Earlier this week, I followed a talk by Mads Torgersen at DotNet SouthWest, he's the lead designer for the C# language at Microsoft. He outlined the cool new things C# 10 will contain. Let's take a quick look at some of the good things coming our way!

Small disclaimer, most of these changes are pretty much done as he was clearly showing off. Since it's still in active development, I can't guarantee that everything will be exactly as is when C# 10 releases.

The first thing he talked about, is how the current implementation of record uses a class (read: reference type) as the base object. There will also be a record struct variant available so the underlying type can be a value type. The difference is that a regular record will pass from function to function by reference and a record struct will be copied by its values. The record struct will include with support.

At the same time, it will be possible to add operators to records. It will be available for both record types.

One of the goals the C#-team is focussing on, is making initialisation of objects easier. That is why it will be possible to flag properties of a class, struct, record or record struct as required. It makes those properties mandatory to fill in. This can be done via a constructor, or this can be done with object initialisation. The two class definitions below are equivalent. If you write it with the required keyword, you cannot instantiate the Person without setting the Name property. The compiler will throw errors and fail to compile.

To further improve properties, it will be possible to get rid of backing fields alltogether. The new keyword field will provide access to said backing field. This will be available for both setters as init only properties.

There will be a few nifty little enhancements in the next version as well. One is that the with operator will support anonymous types as well.

It will now be possible to create a single file with namespace imports that are used everywhere. For example, if there is a popular namespace that is used in virtually every file, say Microsoft.Extensions.Logging.ILogger, then it will be possible to add a global using Microsoft.Extensions.Logging.ILogger to any .cs file (I suggest the Program.cs or a dedicated Imports.cs) and the logger interface will be available in the entire project. Not the solution! Nobody can predict which imports are needed anywhere, so they are grouped per project.

Subsequently, there will also be an optimisation to namespaces. Now a namespace requires curly braces {} to group code which entails that all code will at least be indented once. To save that tab (or four spaces, whatever, you choose) and the screen real estate, adding a namespace anywhere in a file, will make all code belong to that namespace. Research has shown that nearly all code in one file belongs to the same namespace. The subsequent reduction in file size because all those tabs (or spaces) are saved might not be significant for one solution (even if it contains thousands of files), but on the scale of GitHub/GitLab/BitBucket/..., I think it will save them some space. Should anybody still want to include multiple namespaces in one file, the option to use the curly braces is still available.

Thanks at Schooley for suggesting a less confusing example attribute!

Lastly, it will be possible to specify static methods and properties on interfaces. I know this will be a controversial topic, just like adding default implementations to interface. I'm not a fan of that last one. This however, could be very interesting. Imagine that you could specify the default value of an interface or specify creation methods.

Personally, I like these changes. My favourite ones are the changes to namespace and the improvements to the interfaces. Anyway, the future is seeing sharp. Eh Eh...

I'll see myself out now.

Where do I get the Shirt? :D 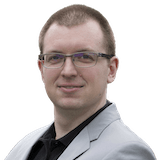 No idea, I got the image from Google image search. I searched for Creative Commons Licenses (I can reuse those images without copyright issues, iirc). So it's not my hoodie and I can't easily find the picture again.